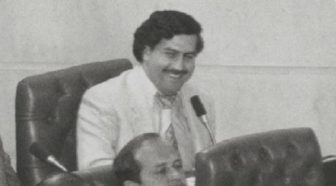 The extent of Escobar’s crimes will never be fully known or verified. However, vast numbers of people were killed on his command. His particular way of handling any authorities questioning his actions was to bribe them or to kill them, or ‘plata o plomo’, Colombian slang for ‘money or bullets’.

Escobar was believed to have had Medellin drug lord Fabio Restrepo murdered in 1975, in order to take over full leadership of the Medellin Cartel. A decade later, in 1985, the Colombian Supreme Court was studying the constitutionality of Colombia’s extradition treaty with the United States. It was besieged by left-wing Colombian guerrillas from the 19th of April Movement (M-19) and half the court’s judges were murdered. Escobar was thought to have been responsible for this action but this was never proven. 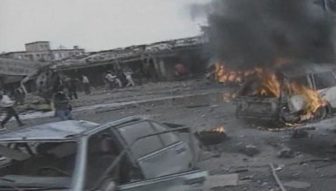 The 1989 bombing of a Bogota security building was attributed to Escobar. A number of American intelligence reports claimed that Escobar‘s cartel was planning to kill President Bush Sr. with a bomb on his visit to Cartegena in 1989, which did not transpire.

In the early 1990s, Escobar reportedly had Luis Carlos Galan and two other Liberal Party candidates for Colombian president assassinated, as they posed a threat to everything Escobar upheld. A few months later, Escobar had a bomb planted on an aeroplane on which presidential candidate Csar Gaviria was travelling. Avianca Flight 203 was blown out of the sky, killing 110 people.

Escobar apparently caught one of his servants stealing some silverware and the man’s punishment was to be tied up before being thrown into the swimming pool whilst everyone present watched him drown. Throughout its existence, the Medellin Cartel fought its main rival, the Cartel de Cali, with unrelenting death on both sides. It was claimed that the Moncada brothers, business associates of Escobar, were murdered whilst visiting Escobar in his prison, La Catedral.

Included in the list of those killed by Escobar’s influence are many ordinary citizens, scores of journalists, over 1,000 police officers, more than 200 judges, an attorney general and a justice minister. 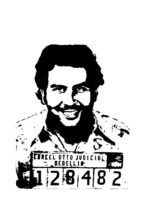 Upon their return from a drug run to Ecuador in May 1976, Escobar and a number of his men were arrested on charges of drug possession: cocaine.

Initially Escobar tried to bribe the judge to drop the charges but this had no effect. His lawyers then entered into several months of legal argument, to no avail. Escobar put an end to the matter by having two of the arresting officers killed and the case was duly dropped.

On 18 November 1986, Escobar was once more arrested on charges of drug smuggling and racketeering, and once more through use of terror, the charges were dropped. As this became Escobar’s standard way of obliterating any opposition, he was never arrested again. 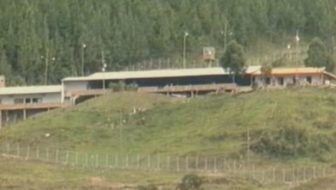 By the early 1990s, pressure on Escobar was mounting and in 1991, he approached the Colombian government to make a deal. In exchange for their guarantee of no extradition to the US, he would willingly hand himself in, stop all drug trafficking and be jailed for a five-year period. The government accepted the deal, on Escobar’s terms, which included being permitted to build his own ‘jail’, named La Catedral, which resembled more a luxury hotel than a prison.

It was a safe place to hide from potential assassins and he was regaled with an endless supply of five-star food, drugs, alcohol, prostitutes and visitors. It is alleged that he was occasionally allowed out to attend football matches and parties. Whilst in confinement, Escobar was not only living a standard of life to which he was accustomed, he even continued to run his cocaine empire, albeit telephonically.

Due to growing public pressure, Colombian officials made plans to move Escobar to a regular prison. On 22 July 1992, after a year of living at La Catedral, Escobar made his escape whilst being transferred and went on the run. The United States finally felt authorised to participate in the manhunt, which they helped direct and finance. On 26 July 1992, American Delta Force operatives joined the Medellin Search Bloc. It was a joint team of Colombian police and army, headed by police Colonel Hugo Martinez, and backed by agents from the US Drug Enforcement Administration, the CIA and later the Navy SEALS.

Escobar remained a fugitive for 16 months, during which time an extraordinary number of people were murdered. He reportedly paid his hit men for each Search Bloc member they killed and over 600 police agents died during the manhunt. In early 1993 a vigilante group formed, calling themselves Los Pepes (People Persecuted by Pablo Escobar), with the express purpose of violent revenge for all he had done. Los Pepes was given financial backing by the Cali Cartel and its numbers grew as more of Escobar’s enemies joined.

Attacking Escobar’s dynasty from all angles, Los Pepes bombed his properties and targeted his source of money laundering by killing the white-collar infrastructure of the Medellin Cartel, which included Escobar’s own extended family members. There was speculation that some Search Bloc members were helping Los Pepes in their endeavours.

In February 1993, Escobar’s wife and children applied to the US Embassy in Bogota for visas to enter America but they were refused, under orders from President Cesar Gaviria. Colombia’s top federal prosecutor, General Gustavo de Greiff, disagreed with this decision and, calling himself an independent entity, entered into negotiations to help them leave Colombia in return for Escobar’s surrender.

On the night of Friday, 26 November 1993, the US Embassy in Bogota received information that Escobar’s wife and children were once more planning to flee Colombia. They were successful this time and landed in Frankfurt, Germany on Sunday 28 November 1993.

The Lufthansa aeroplane was forced to taxi to a remote part of an alternate runway, in order to avoid the press awaiting their arrival at the terminal. It wasn’t long after this that authorities traced a telephone call made by Escobar, which enabled them to track him to a house in Medellin.

On Thursday, 2 December 1993, a day after his 44th birthday and after a manhunt that lasted 16 months, Escobar was finally found and cornered in one of his hideouts in Los Olivos. He and his bodyguards attempted to escape via the rooftops and were engaged in a protracted gunfight with Search Bloc authorities. Escobar was wounded in the leg and torso before receiving a fatal shot to the head. There has been speculation as to who fired the fatal bullet and the possibility put forward that it might have been a planned execution.

Colombia certainly did not rid itself of the scourge of its cocaine trade with the death of Escobar but it was successful in destroying the powerful Medellin Cartel. The Cali Cartel took its place until the mid 1990s, when the Colombian government either caught or killed its leaders.

Escobar’s infamy lives on and he is the subject of books, films and television documentaries. Books include ‘Killing Pablo: The Hunt For the World’s Greatest Outlaw’ (2001) by Mark Bowden and ‘Clear and Present Danger’, a novel by Tom Clancy and a film of the same name, which features a Colombian drug lord named Ernesto Escobedo. Films based on his life include ‘Blow’ (2001), starring Johnny Depp and Penelope Cruz, and ‘Pablo, Angel o Demonio’ (‘Pablo, Angel or Demon’) (2007), by Spanish director Jorge Granier-Phelps. There was the television movie ‘Drug Wars: The Cocaine Cartel’ (1992) and television documentary ‘The True Story of Killing Pablo’ (2002). He has even surfaced in a video game, with an airport named Escobar International Airport in ‘Grand Theft Auto: Vice City’ and had commemorative songs written about him.

In 2006, a Truth Commission, instigated by three judges of the Colombian Supreme Court, included in its report claims that Escobar had been behind the 1985 M-19 siege of the Supreme Court. One of these claims was from ‘Popeye’, a former Escobar hit man. On 28 October 2006, Escobar’s body was exhumed at the request of his nephew, Nicolas Escobar. It was in order to verify that it was Escobar’s body in the tomb and also to collect DNA for a paternity test claim.

The Victims
Many ordinary citizens, scores of journalists, over 1,000 police officers, more than 200 judges, an attorney general, Colombian presidential candidates and a justice minister. 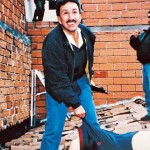